I adore Suffolk for many things, including its people, its beauty, its wildlife, its innovation, its preservation, its community and its diversity.  I also love this county for its partnership commitment to a climate change strategy and its ambition to make Suffolk the UK’s greenest county.

The annual awards ceremony, held yesterday at Snape Maltings, shines a spotlight on the county’s achievements and this year’s ‘Green Oscars’ reported even more entries than ever – 149 in fact –  from schools, businesses and communities across Suffolk.

Hosted by BBC Suffolk’s Mark Murphy, the Creating the Greenest County awards are celebrating their eighth year and it was an absolute delight to hear naturalist and broadcaster Chris Packham deliver this year’s introductory keynote.

Chris Packham and the BBC Springwatch team already bring national attention to the feathered and furry inhabitants of RSPB Minsmere, so it was interesting to hear his thoughts about Suffolk’s other environmental assets.

From his personal anecdotes about the environmental strategy of the hotel where he stayed in Aldeburgh to his reflections on the degree of ambition of Suffolk’s Creating the Greenest County, the Climate Change Partnership and Suffolk’s Nature Strategy, he made it clear that our local achievements have national significance and set a standard that should be followed across the rest of the UK.

At a government level, he warned about short-termism that shrouds politics and the need to take a long-term approach to protect the environment and how although it didn’t apply to yesterday’s awards, he worries that celebrations can lead to complacency.   In comparison, he sees Suffolk as a rarity and the county’s level of ambition as staggering.

And yesterday there was many a reason to celebrate where winners included community-led flood defences, community-owned energy, a woodland sanctuary, a community barn owl project and community solutions to reuse and repair opportunities as well as sustainable businesses and green projects embedded in schools. 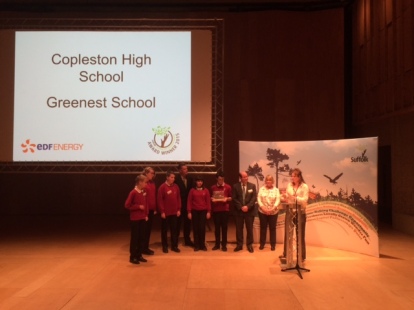 I’ve made much use of the word ‘community’ and that’s exactly how it feels observing Suffolk’s movers and shakers pull together in the short number of years that I’ve lived in the county.

It is also clear how much support comes from local media too with coverage of news from BBC Suffolk, the Bury Free Press and the East Anglian Daily Times (EADT).  Another discovery yesterday, was that the EADT was the first local newspaper in the UK to appoint an environment correspondent, David Green, who joined the paper over 20 years ago.

It was the EADT’s current Environment Correspondent, John Grant, who received the very first Derek Moore Memorial Award for outstanding contribution.  In memory of Derek Moore, a highly respected former Suffolk Wildlife Trust director who died last year,  the award was presented to John Grant for his journalistic coverage and his tireless voluntary work in ornithology.

The Creating the Greenest County awards were as inspiring as ever and again, I came away buoyed by the achievements and ambitions of the amazing people of our county.

Congratulations to all runners up and winners. I feel proud to live in a county that doesn’t shy from the challenges of climate change but which proactively works towards resilience, protecting its species, inspiring its communities and encouraging organisations to become more sustainable.  And Chris Packham is indeed right.  We shouldn’t become complacent in success.  Now is the time to celebrate, take a deep breath, look around us and then ask what else must we do.

More coverage of the awards can be found at BurySpy, and at EADT, which also features a picture gallery of all fantastic winners.  And if you know a project that should be entered into next year’s awards, keep an eye on the Green Suffolk Awards page, where news of how to apply will be announced at the end of the year.